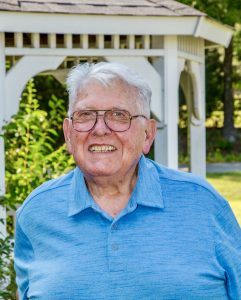 William Franklin “Bill” Martin, 82, of Mineral, VA, passed away peacefully on June 10,
2022.
He is survived by his sister Ann Lawrence and her husband Paul of Flemington, NJ;
daughter Cheryll Paull and her husband Jim of Castle Rock, CO; son Christopher Pearmund and
his wife Lucia of Warrenton, VA; daughter Teri Kron of Hemet, CA; daughter Kenna Huston and
her husband Bill of Sterling, VA; and daughter Tammy Barrett and her husband Tim of Holly
Springs, NC. He is also survived by seven grandchildren and eleven great-grandchildren. He is
pre-deceased by his wife Gail
The son of William and Priscilla Martin, Bill was born in Fort Worth, TX, on July 28, 1939.
He went to Polytechnic High School. He left at age 17 and four days, his mother fibbing about
his age to join the Air Force early. He proudly served for four years, and then both in the
California and Virginia National Guards.
Bill married Linda Brossia on March 19, 1959. Cheryll was born in Great Falls, MT, and
Teri was born in Fort Worth, TX. He became a letter carrier in California—little did he know he
would meet a very special customer! He and Gail were married February 10, 1968, in Las Vegas.
Tammy was born in Bellflower, CA.
Bill was in the United States Postal Service from May 1962–October 1992, starting as a
mail carrier and retiring from the postal service headquarters in Washington, DC.
Bill and Gail retired to Bumpass, VA, in Louisa County, VA. Bill became a volunteer
machine! He was a volunteer of Louisa, the Louisa County 2065 National Active and Retired
Federal Employees Association (NARFE), Louisa County Planning Commission, Crime Stoppers,
Stage Alive Community Concerts, Elections, Lake Anna Rescue Squad, Lake Anna Civic
Association (LACA), Lake Anna Advisory Committee (LAAC), Louisa County Clean Community
Commission, Jefferson Area Board for Aging (JABA’s) Home Delivered Meals program, and
Meals on Wheels. Bill and Gail maintained a four-mile stretch of Adopt-A-Highway roads and
served on the board of directors for the Louisa Republican Committee and a board member for
Stage Alive Community Concert Association. Bill loved helping animals through the Green Dogs
Unleashed charity.
Bill and Gail were adventurers. He had traveled to all 50 states and extensively
throughout the world. He touched lives all along the way.
The Celebration of Life service for Bill Martin will be held at the Lake Anna Rescue
building on Sunday, June 26 at 3 pm ET
In lieu of flowers, the family asks that donations be made to Green Dogs Unleashed at
greendogsunleashed.org.