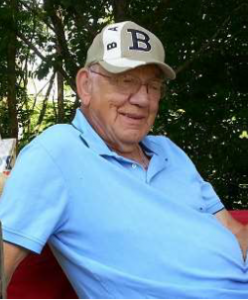 Warren “Bradley” Seay, Sr. of Louisa, Virginia, born April 19th, 1932, passed away on Friday, August 26th, 2022 at the young age of 90.  He was preceded in death by his wife of 48 years, Louise Clatterbuck Seay, and his youngest son, Welby “Rex” Seay.  The third oldest of nine children, he is also preceded in death by his parents, Ellis Bain Seay, Sr. and Lottie Howard Seay, siblings, Ellis Bain, Jr., Virginia McCormick, Willard, Sr. and Remona Harlow.

He was an avid hunter, fisherman, and gardener, and so much more.  Bradley also coached youth sports for many years, both in baseball and football and was given the nickname Sparky by his competition, Dicky Purcell, and dear friend, because of his competitive nature on the field.

A carpenter by trade, Bradley worked many years building houses advancing his knowledge in the construction field and eventually becoming a building inspector for Louisa County.  He served Louisa for many years until his retirement in 1991. After a successful brain surgery, Bradley continued to maintain three large gardens, hunt, fish, continued to drive until about six months before his failing health.  He had a love of outdoors, his pets, and so much more, but cherished his children, especially his grandchildren and his great grandchildren.

We would like to thank the staff at Martha Jefferson hospital, as well as the Hospice of the Piedmont.

In lieu of flowers, donations may be made to Hospice of the Piedmont, 675 Peter Jefferson Parkway, Suite 300, Charlottesville, VA 22911 in his memory.