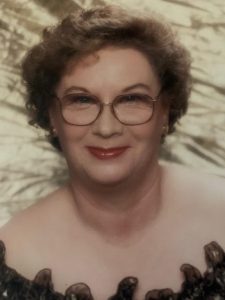 Shirley Harris, daughter of the late Ralph Lewis Shifflett, Sr. and Myrtle Follin Shifflett, departed this earth on Tuesday, November 24th, at age 79. She was born on November 17, 1941 in Fairfax, VA and was a 1959 graduate of Stafford High School and the Nursing Program. While working at Mary Washington Hospital as an LPN, she met James Robert Harris of Spotsylvania, who became her partner in marriage and life for 59 years. This union blessed them with four children: Deborah Harris Howard of Bowling Green; Elizabeth Harris Houser and James Richard Harris of Spotsylvania; and Jennifer Carroll of Louisa. The couple resided in Spotsylvania for 45 years before retiring in Louisa where they have resided for 14 years. Mrs.  Harris is survived by her brothers John Shifflett and Ralph Shifflett, both of Stafford; sister Lucy Shifflett Woodard of Fredericksburg; ten grandchildren; and several great-grandchildren. She was preceded in death by her parents and her grandson Michael James Taylor.

Mrs. Harris was a devoted and loving wife, mother, grandmother, and great-grandmother. While raising four children, she was a bookkeeper for her husband’s plumbing and heating business for numerous years. She was also a dedicated member of Shady Grove United Methodist Church in Spotsylvania for several years and held several positions. Some of her passions were gardening, baking cookies with her grandchildren, taking family vacations, and sewing. She especially enjoyed making baby quilts and giving them to expectant mothers. Because of her loving heart and pleasant personality, she was loved by many. Her Christian life and influence will remain in the lives of all who knew her. God now has another beautiful angel.

A courageous three-time survivor of cancer, Mrs. Harris had been battling Alzheimer’s and cancer; however, she sadly succumbed to death due to COVID-19.

Arrangements are incomplete at this time. In lieu of flowers, the family asks that donations be made to the American Cancer Society: www.cancer.org or PO Box 42040, Oklahoma City, OK  73123, in memory of Shirley Harris. Please request that acknowledgement cards be sent to:  Elizabeth Houser, 318 General Dr., Spotsylvania, VA  22551.