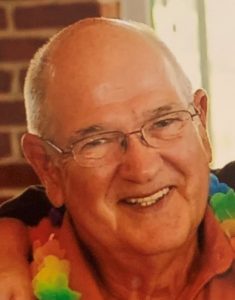 Reginald John Arnold, 83, of Mineral, joined his beloved wife in the Lord’s Kingdom on Thursday, November 11.  He died peacefully in his home.  Reg was born on April 10, 1938, in Sunbury Pa.  He married Patricia (Dorsey) in 1956.  Reg served his country in the US Navy, from 1956 to 1960.  Upon his return from service, Reg earned a Bachelor’s degree, with honors, from Bloomsburg State.  Reg and Pat enjoyed 64 years of marriage until Pat’s death last December.  The family moved to Virginia in 1965 and Reg began a long career with the federal government from which he retired in 1993.  He enjoyed retirement at Lake Anna where he loved to fish and entertain family and friends. In his retirement, he was also active with the Mineral Rescue Squad, Habitat for Humanity, and the Louisa Community Cupboard (Louisa County Resource Council).

He is survived by two children: Reginald Arnold, II and his wife Fran of Haymarket, VA; and Kathleen Cain and her husband Brian of Mineral, VA.  Also surviving Reg are his five grandchildren and four great-grandchildren.

There will not be a public memorial service.  Donations may be made to the Louisa County Resource Council or the Santa Council.