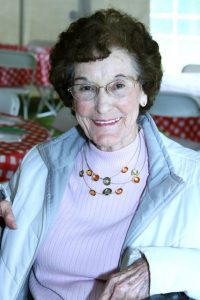 Lucille was born on February 8, 1931 to Leon and Georgie Carter. In addition to her parents, Lucille was preceded in death by her sister, Elizabeth Harlow, brother-in-law Tom Harlow, and sister-in-law, Betty Carter, all of Louisa, VA.

Lucille is survived by her husband of 49 years, Franklin E. Williams, her son, James Allen Harlow; and a granddaughter, Jessica Harlow also of Louisa, VA. Lucille is also survived by her two brothers, Clarence Carter, and Ernest Carter (Diana); and numerous nieces and nephews.

Lucille was a lifetime member of Macedonia United Methodist Church, sang in the choir and attended faithfully until her health declined. Lucille worked at businesses including the Louisa Sewing Factory and later at Safeway and A&P Stores.  She was a good neighbor and friend to all and will be greatly missed. After retiring you could find Frank and Lucille singing at Louisa Health and Rehab and enjoying fellowship at the Betty Queen Center where they acquired many friends.

Visitation will be held form 2 p.m. to 3 p.m. on Sunday, July 10 at Woodward Funeral Home in Louisa Va. A funeral service will follow at 3 p.m. with Pastor Steve Hall officiating. Interment will  follow in Hillcrest Cemetery.