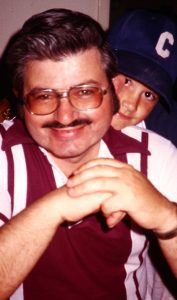 Kindness and hard work were the bywords of Leslie Heagney’s life. He was born on March 23, 1937 in the Bronx, NY and raised as an orphan. He enlisted in the United States Air Force in 1956 and was honorably discharged in 1960 after service at a Strategic Air Command base in Plattsburgh, New York.  In 1959 he married the love of his life, Charlotte Seaman, in Holley, New York.

Les graduated from the Rochester Institute of Technology (RIT) in 1966.  In 1968, Charlotte and Les moved to La Mirada, California.  He was an usher and volunteer religious education teacher for twenty years at Beatitudes Roman Catholic Church.  He coached soccer and baseball for many years.  His work for Willamette Industries in the computer forms division coincided with a remarkable increase in demand for paper fueled by the increase in personal computing. Les served as a plant manager for the Cerritos paper plant and served on the board for the company’s political action committee, WILPAC. He and his wife Charlotte were very active in California Republican politics for decades. The family especially treasures a photograph of Les chatting with President Reagan at a White House reception in 1982.

In 2003, Les and Charlotte moved from California to Fredericksburg, Virginia and lived in Falls Run retirement community to live closer to their grandchildren. Les was a parishioner at St. Mary’s in Fredericksburg for 17 years. He was diagnosed with Parkinson’s disease in 2006. In 2019, Les and Charlotte moved to Beaverdam, Virginia to live next door to their son Sean and his family. Les passed away on February 27, 2021.

Visitation will be held 10 to 11 a.m. Monday, March 8, 2021 at St. Jude Catholic Church Mineral, VA with a Mass of Christian Burial to follow at 11:00 a.m. with Father Michael Duffy officiating. Graveside Services will be held 1:30 p.m. Wednesday, March 10, 2021 at Quantico National Cemetery.