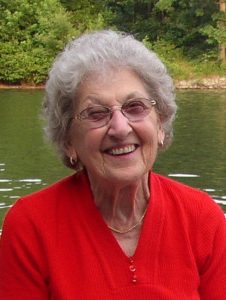 Julia was born in 1918 in the small mining town of Piney Fork, Ohio.  Her parents were immigrants from Czechoslovakia.  She married her 5th grade sweetheart, Henry Arrett in 1941.  In 1953, with their two daughters, the couple moved to Southern California, where Henry established a flourishing business as a barber and Julia worked as head bank teller.

The family moved to the Washington, D.C. area in 1978.  Henry served as a Doorkeeper for the U.S. House of Representatives and Julie did her best to spoil her two granddaughters.  She now has three great-granddaughters.

In retirement, Henry and Julia decided to have a home built at Lake Anna and both of them enjoyed fishing, boating and particularly water skiing.  Julia joined the Lake Anna Craft Club and was still water skiing at age 70.  They enjoyed their last jet ski rides at 94.

They were active members of the Immaculate Conception Catholic Church in Bumpass for 23 years.  Julia was a kind, determined, intelligent woman who cared deeply for her family, friends and neighbors.

Memorial plans will be delayed until a later date.