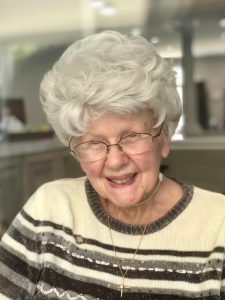 Joyce Jeanne Wagoner Kutsche, 93, finished her earthly life on Friday, July 31st, 2020. She was born in Dearborn, Michigan, first child of Darwin Earl and Bernice Raycraft Wagoner. She led her adopted brother, Allen, on many adventures, specifically climbing into the highest treetops. Her baby sister, Carol Elaine, counted on Joyce to ride the edge off her energetic horse, Colonel, so she could handle him. Joyce was musical and sang in church choir (directed by her mother) and in a trio for servicemen during WWII.  She also took an unsanctioned flight in a trainer aircraft with a “friend” when her dad was stationed in Massachusetts. She met her future husband, William Frederick Blake Kutsche while attending Michigan State University where she graduated with a degree in Music Education. They married and had five living children.

For many years Joyce directed choir at Oscoda United Methodist Church, and helped establish the Iosco Community Concert series. She and Blake spearheaded a drive to establish the Oscoda Beach Park through the “Make Oscoda Better” Association, which fought a legal battle to remove a trailer park in the early 1960s.  After the court ruling, the park developed into the beautiful space it is today, shared by all. The recreational sport store Sport ‘n Trail, which Joyce and Blake owned and managed for many years, supplied motorcycles, snowmobiles and watercraft to the local community. After ill-health forced a move to Virginia, Joyce remained active into her 90’s as a member of Louisa UMC, singing in the choir and in the Louisa Community Chorus, directed by her daughter.

She is also survived by her sister, Carol Wagner (Tom); and many nieces, nephews and friends.

To continue her legacy of enthusiastic living are her grandchildren and