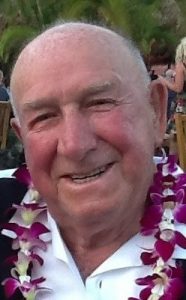 John Earl Talley, 91, of Mineral, Virginia, passed away on 17 June 2020 at his home after succumbing to complications associated with prostate cancer.

He was born in Dekalb County, Alabama, on 6 March 1929, son of the late Thomas and Tinnie Talley with eight brothers and sisters. He is survived by his wife of sixty years, Carolyn, his daughter, Deborah, his son, John Jr., his brother, Norman, his niece and nephew, Sherry and Paul, an extended close family spanning Texas to Maryland, and a plethora of grand-animals. John left school in the sixth grade to help on the family farm before serving in the US Navy from 1947 to 1952, most notably aboard the Destroyer, USS Furse as a Machinist Apprentice. Using his constitution and work ethics from his life on the farm and the skills he learned in the Navy, he pursued a career in construction with Otis Elevator Company until forming his own company, Lynn Fabricators, in 1962 in Washington, DC, where he managed the business until his retirement in 1995.

An easy rider himself, John witnessed the turning points in American history: The Great Depression, the birth of Rock and Roll, the Counter Culture and Civil Rights Movement, the birth of space exploration and bell bottoms, the Great Recession, and four wars. During his long life and through retirement, John shared his zeal for life with many friends with whom he enjoyed motorcycle riding, boating, and motor homing. He travelled to all fifty states and abroad to Europe and Asia.

John was a proud man, a hard worker, and a relentless seeker of improvement who never settled for less than the best. He continued to work on his land and ride his tractor until weeks before passing. He will be forever known as a dedicated husband, father, and businessman, and as a purveyor of the perfect margarita.

The family is planning an event in the future to celebrate John’s life and legacy. Family and friends are encouraged to attend and celebrate the life of Big John when a time is established.

The Talley family is especially grateful to the doctors and nurses of Martha Jefferson Hospital and the entire staff at Legacy Hospice for their wonderful and critical support and assistance through this difficult time.