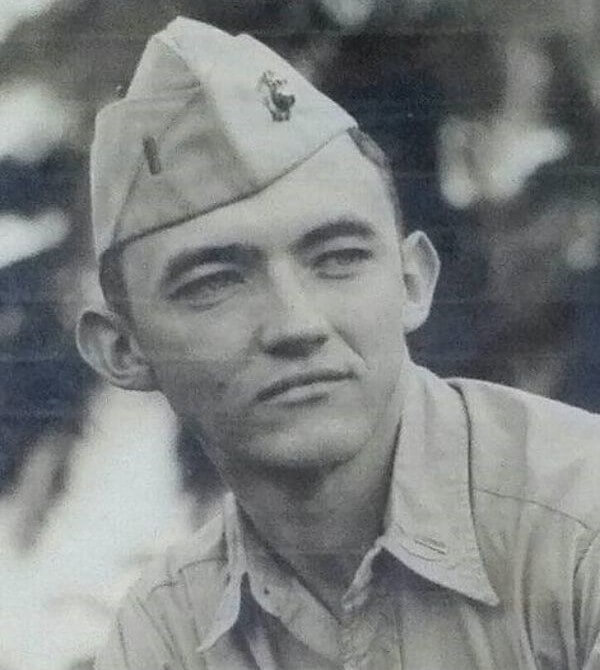 Mr. John Blair Gilmer, 96, passed into the hands of our Lord on March 22 after a brief period of illness. He was born in Tatapurim, Cochin, India in 1922 to Weir B. Gilmer and Ruth Monroe Gilmer, moving with his family in 1926 to reside at “Woodbourne” in Louisa County, his home for the last five decades. He graduated from Clemson University in June 1942 with a B.S. in Architecture. That year he answered the call of duty by enlisting in the U.S. Marine Corps, and served with the Third Marine Division, 9th Regiment, on Guam and Iwo Jima. He returned to the United States in 1946, remaining in the Marine Reserves until retiring at the rank of Major in 1964. In 1947 he married Ruth Canon Smith, his wife until her passing in 2011. While residing in Louisa, John attended T. C. Williams School of Law of the University of Louisa, graduating in 1965, and practiced in Louisa before returning to his home town of Louisa in 1972. He practiced law there until 2010, including service as Commonwealth’s Attorney for Louisa County 1972-1975, and later as Commissioner of Accounts.

John Gilmer was always interested in history, building model ships and planes in his youth. Later he developed an interest in the War Between the States and shooting muzzle loaders. He was a founding member of the North-South Skirmish Association, and served as the first National Commander. He was a member of the Thirteenth Confederate Infantry and later the First Louisa Rifles within that organization. Family vacations were most often camping trips to places like Camp Perry, Ohio and other sites where “skirmishes” were held. He also participated in reenactments, including the Centennial reenactment of First Manassas. He was a Revolutionary War reenactor with the First Virginia Regiment. John’s interests widened to include his being a founding and charter member of the Louisa Historical Society where he served as president. He was a Life and Distinguished Member of the Meriwether Society. He was a member of the Ruritan Club, Rifle Association, a member of Sons of the Confederacy, and a member of the Sons of the American Revolution. He shared a more recent interest in toy trains with his family. It was a great pleasure for him to go to the TCA York toy train meets, where his camper became a headquarters for attending family and friends. He was a founding member and active participant in the Virginia Train Collectors, and more recently a member of the Train Collectors Society (UK) and Hornby Railway a life member of the National Collectors’ Association. John was a faithful member of Louisa Baptist Church where he taught a men’s Sunday School class for many years.

The family will greet friends and relatives from 6:00 to 8:00 P.M. on Tuesday, March 27, at Woodward Funeral Home, 200 Fredericksburg Ave., in Louisa, Virginia. There will be a family graveside service at Hillcrest Cemetery on March 28 followed by a 2:00 P.M. memorial service at Louisa Baptist Church, 305 E. Main Street, Louisa. In lieu of flowers, donations may be made to the work and ministry of Louisa Baptist Church.