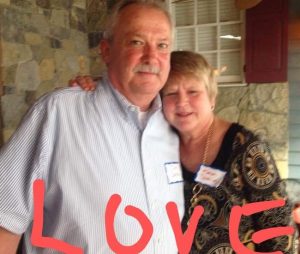 On Tuesday, June 9, 2020, my life was forever changed, I lost the love of my life, John A Spaid III. His loss has left me surreal and praying for the next step in this journey to my new normal.

He was born on January 28, 1953 into a large loving happy family of Triplett’s and Spaid’s.  Right from the start he was full of life and mischief and those attributes lasted his entire live – most certainly the Mischief! (which he got from his mother) He was lovingly called Little Johnny and Johnny Angel!

John Spaid, how to describe this wonderful, kind, soft spoken gentle man. John had a childhood, that one may envy in our world today.  He was the youngest of the Spaid cousins, all boys.  They worked and played hard on their Granddaddy’s farm.  John was All Boy forever playing in the outdoors. He had great mentors in both his Granddaddy and Daddy who taught him to respect nature in all its forms and to continue to be a steward to the earth.  He even had the privilege of spending time at “The Prestigious Hunt Club” with his daddy and friends. He told me so many stories of his life growing up; he should have written a book about the many imaginary and real adventures he experienced along the way of his wonderful journey from boyhood to manhood.

He graduated in 1971 from Handley High School in Winchester where he was a Star athlete.  Lettering in all sports. To this day, John still holds records at the school, and even the current generation knows who John Spaid is from his time at Handley.  Football was his passion and had the privilege, to move on to play at his beloved Virginia Polytechnic Institute and State University, better know as VA TECH.  John loved his school as all others love the schools they attend.  For me, I was proud of him that he continued the spirit of what his farther taut him, you live in Virginia, you support all Virginia schools. You want your state to do well, when it comes to your Rival Game, then you root for your team.  He was a true sportsman and was the first to shake your hand or make a call to congratulate those from his rival team if they won.  This was one of many reasons why I loved this man.  He was a true gentleman.

Johns life was never easy, both him and his sister Chris, lost both their mom and dad a young age which left this brother/sister duo to grow up on a faster path than planned.

They both went on to colleges to find out who they were as individuals.  Chris worked for the Boy Scotts of America for many years up to retirement.  John was headed in many different paths during his career, Food Industry, Manufacturing, Purchasing, Defense Work.  His career ended recently, and he was looking towards to retirement, with me, his Lucy, Blondie, Meatball whatever he called me with love. I answered to the all, since my faith in John’s love for me never failed, even when he was being silly! We met in 2000 and have been inseparable, since, my life is forever changed.

He was preceded in death by his parents John A, and Martha Spaid, Jr.; His precious baby girl Malin Spaid; His Grandparents, Aunts, Uncles, Cousins, and friends as well who will all be meeting Johnny upon his arrival.

John leaves behind to cherish his memory his wife, Karen Spaid of Zion Crossroads,VA; sister Christine Spaid of Winchester, VA; and TOO many Family members and friends to list.

In reading all the wonderful comments that folks left on FB, the consensus was that John A. Spaid, III was a Kind, Gentle Man.  He made you feel comfortable the first time you met, he made you feel important and that you mattered.

I want the opportunity for people to sign his book, but want to call out two of the eulogies that have been posted on Facebook:

My great fried John Spaid died late night – originally a friend of a friend we became very close ourselves over last 25 years – John was a star football player at Handley High in Winchester, attended FUMA for a year of “Seasoning” and then became a scholarship player in the fall of1972 – punter ad DB-post-college he worked in various restaurant businesses and then in manufacturing and defense contracting around the Charlottesville area for the last 45 years – he was part of our very tight tailgate circle in the Hook and rooted for the Hoos every game but 1 every season – one of my life’s desires in hindsight would have been for John and his best friend (and my great friend and frat brother) Dave to have had their own restaurant in town – John was a talented chef and Dave knows his wines – John’s life was not always easy but he persevered and spent the last 20 years with the love of his life Karen – most importantly , John was kind, caring, exceptionally bright and a sweet man – I will carry the soothing tones of his always calm and collected voice to my grave – I am saddened beyond sad at his loss but blessed to have had him as a friend.

Last night I got the phone call that everyone dreads.  My dear fried John Spaid left this temporary life for his eternal home. John was my friend for 40 years, the brother I never had.  To my folks, he was the second son they never had.  I will treasure forever the time we had together and the adventures we shared I am very proud that John considered me his friend. I intend to use this time to reconnect with friends and not take anything for granted.  To Karen, I know there will be tough days ahead but you are surrounded by people who love you, Please reach out to any of us and I know we will help in anyway possible. RIP John Boy you are home in His Glory.  Until we are reunited to get in a good game of Horse, I Love You Man!

The family is planing multipal  memorials threw out the season to honor John.