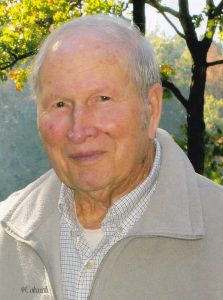 James Robert Donald of Mineral, Virginia, died of Lewy Body Dementia on February 18, 2021. Mr. Donald was born in Colquitt County, Georgia, December 31, 1933, the son of the late Clinton Earnest Donald and Lorena Branan Donald. The eldest of three children, Mr. Donald grew up on a farm in Omega, Georgia.

Mr. Donald graduated from both Abraham Baldwin Agricultural College in Tifton, Georgia and the University of Georgia in Athens. He received his master’s degree from North Carolina State University and later did postgraduate doctoral work at Michigan State University. Throughout his academic and professional career, Mr. Donald focused on economics.

His deeply rooted love of the land led Mr. Donald to join the U.S. Department of Agriculture in Washington, DC in 1957. During his first two decades of public service at the USDA, Mr. Donald focused on commodity research, particularly cotton, and agricultural outlook. He was a member of the Senior Executive Service and became Chairman of the World Agricultural Outlook Board in 1982. As Chairman, he was tasked with keeping the Secretary of Agriculture informed on weather and economic developments both in the US and abroad, considering how those two areas impacted farmers’ income and US government costs. Throughout his USDA career, Mr. Donald received merit commendations for his dedicated service, particularly in recognition of his tireless work in the wake of the 1986 Chernobyl nuclear disaster. In 1989, President George H.W. Bush awarded him a Presidential Award for “sustained superior accomplishment in management of programs of the United States Government and for noteworthy achievement of quality and efficiency in the public service.” After 38 years of service, he retired from the USDA.

For many years he was an avid bass fisherman, spending countless hours fishing at lakes and rivers throughout Northern Virginia. He shared his love of the water with both his wife and children who often joined him on Saturday mornings. He wrote about his techniques and experiences, and several of his articles were published in Outdoor Life and other magazines. After his retirement in 1994, he and his wife moved to a house that they had designed at Lake Anna, where his fishing hobby was soon replaced by gardening. He took great pride in his vegetable and berry crops, coaxing raspberry, blackberry and blueberry plants to life. He shared his garden with his grandchildren and instilled in them a love of, and appreciation for, nature. An avid bird watcher, Mr. Donald enjoyed a life-long love of purple martins, maintaining homes for them and following the progress of their families. Each spring he would eagerly watch for the return of some three dozen martin families to the gourds on his lakefront.

Funeral services will be held privately at a later date. Memorials may be made to the Purple Martin Conservation Association (www.purplemartin.org) or to the Lewy Body Dementia Association (www.lbda.org).