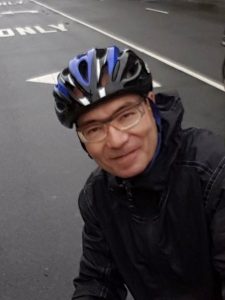 James “Jim” Eugene DeLuca, 57, passed away peacefully in his sleep after a long illness.

Jim held various jobs around San Jose, but his most proud accomplishment was his employment at Lohmann Precision Die Cutting where he worked as an operator and quality inspector. To be closer to his sister in North Carolina, Jim later transferred to Lohmann Specialty Coatings in Orange, Virginia.  Jim was well respected and admired by his co-workers at Lohmann and, in turn, Jim loved his job and his co-workers during all his years working there. Jim was a generous person and always helped anyone or any animal in need.  Jim loved the outdoors and was an avid cyclist, he loved mountain biking and he was passionate about all things fishing.

Jim is preceded in death by his mother, Teruko “Terry” (Matsuzaki) DeLuca; and his father, Peter Paul DeLuca.  Jim is survived by his sister, Janet (Chilcote-DeLuca) Gritter, and her husband Richard.

The family requests those who wish to express sympathy to consider making a donation to the following in James DeLuca’s name The American Diabetes Association or St. Jude Children’s Hosp. or the ASPCA