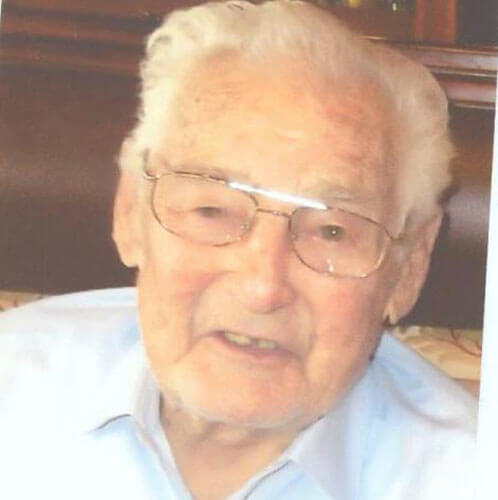 Henry Frank Arrett was born in Piney Fork, Ohio on July 3rd, 1918, passed away on March 18th, 2015 at a hospital near his home in Lake Anna, Virginia where he and his wife Julia Rudlosky Arrett, his childhood sweetheart and wife of 73 years have lived for 23 years. He retired as a U.S. House of Representatives Doorman after being appointed to the post in the mid-1980’s and retired in 1996. Mr. Arrett was a successful barber in Ohio and later in Southern California before he and his wife would move to the East coast. His years of keeping customers calm while he trimmed their hair came in handy on the floor of the House. He often said he did as much talking to Members of Congress coming to the floor as he did daily in his barber shop in earlier days. Nelson Mandella greeted him at the House Door before speaking to a Joint Session of Congress and told him he was “so glad to see someone his own age in The Capitol.” Mr. Arrett and his wife belonged to the Immaculate Conception Catholic Church in Bumpass for 23 years and he was a Grand Knight in the Knights of Columbus for 56 years. He is also survived by his wife, Julie and their two daughters and their families, which include: Barbara Stafford and her husband Bert Stafford of Orange,Va., Richard and Dolly Seelmeyer of Berwyn Heights, Md. They have two granddaughters, and three great granddaughters.A Memorial Service will be held at 10am on Tuesday, March 24, 2015 at Immaculate Conception Catholic Church, Bumpass, VA