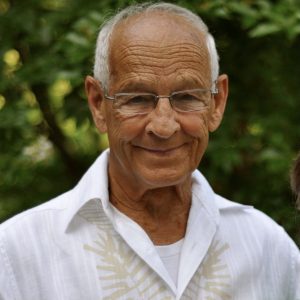 Goodman Burnett (“Budgie”) Duke peacefully departed his family and friends on March 5, 2021 at the age of 91. Except for two years of service in the US Army during the Korean Conflict, Budgie was a lifelong resident of Louisa County.

Budgie was a driving force in business and industry for Louisa County his entire life.  He became interested in the petroleum business before grammar school where he “worked” alongside his father, John A. Duke, Jr. until his retirement in the late 1950s.  Budgie assumed the helm and guided Duke Oil Company through multiple mergers, culminating with sale of the company to Massey Wood & West in 1985.  He remained with Massey Wood & West as a consultant and dutifully attended to his office virtually every day until his death.  In addition to Duke Oil, Budgie’s successful business ventures included Synergistics, Inc., a holding company for Gentry Drilling Corp. and Mid-Virginia Broadcasting Corp., Louisa’s first radio station.  He later headed Refyl, Inc., a propane cylinder exchange and refurbishing company based in Orlando, Florida.  Budgie was also a founding member of Louisa’s first independent community bank, and he served as a member of the Board of Directors for the Louisa Country Club as well as the CV Corporation of Virginia.

Budgie’s talents shined most brightly with his dedication to Louisa County where he volunteered countless hours in service to his community.  Among his many accomplishments:  He was a charter member of Louisa County’s first rescue squad, serving as First Lieutenant and Captain; a member of the Mineral Volunteer Fire Department, serving a term as Chief; a Boy Scout Leader and organizer of the Mineral Boys Club, a town recreational facility for teenage boys; membership on the Mineral Town Council and service as Town Clerk; President of the Mineral Industrial Development Corporation, which brought business and medical facilities to Mineral; 18 years on the Louisa County Industrial Development Authority where he was instrumental in bringing an airport to Louisa County; President of the Louisa Library Foundation; and most recently, Chairman of the James River Water Authority.

Although Budgie shunned the limelight and preferred to remain behind the scenes, he received numerous awards in recognition of his community service.  He was the recipient of the Jaycees Distinguished Service Award in 1959; the inaugural Louisa Chamber of Commerce Business Person of the Year; the 1985 Virginia Economic Development Volunteer of the Year; and he was recognized by Day Lodge 58 AF&AM as a Community Builder in 1993.

Budgie was equally dedicated to his family and relished his time with his beloved wife of 65 years, Becky; his children Goodman Jr. “Butch” (Sharon), David (Morgie) and Andrew (Mary Elizabeth); six grandchildren and his great-grandson.  Budgie loved the water and through the years spent many weekends on his boat at Blue Ridge Shores, Lake Anna, or the Potomac River.  Always active, Budgie was an avid tennis player and continued to play regularly well into his 80s.

A celebration of Budgie’s life will be held at 2 p.m. on Wednesday, March 10 at Walton Park in Mineral, Virginia.  There will be a separate private burial service for members of the family.

The family asks that in lieu of flowers for contributions to be made to the Mineral Volunteer Fire Department or the Louisa Christian Church.