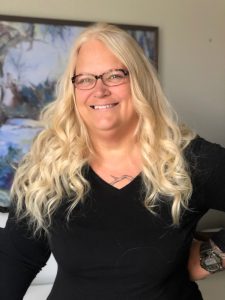 Gloria Jean Boughers, 62, of Mineral, Virginia, died in her home on Thursday, January 13, 2022. Gloria, known as “Glo” to many of her friends and family, was born in Chicago, Illinois to John-Paul Schelling and Viola Jacqueline Davis.

During her early childhood, Gloria moved from Chicago to McLean, Virginia along with her older siblings, Donna and Larry, twins.  As the baby in the family, nine years younger than her brother and sister, Gloria was doted on by her mother and father as well as her older siblings.

As a child, she cherished her cowboy boots and hat, and found a lifelong love of costuming and holiday decorations.

Graduating from Langley High School in McLean, Gloria went on to attend Piedmont College.  In 1980 she married John Boughers, owner of B & B Lock and Key, and settled in Sterling, Virginia where they had two daughters, Jessica and Gail.

Gloria was a “super-Mom” to her cherished daughters, balancing work as a librarian while taking them to countless activities from soccer to swimming to beauty pageants where she would sew her girl’s outfits. She loved taking her girls on special trips including the family’s vacation home in the Outer Banks in North Carolina where she loved watching the sun rise on the beach and having tea parties.

Moving to Mineral, Virginia, in 1997 Gloria and her two daughters visited her parents home in Lake Anna often where the family enjoyed boating, jet skiing and spending nights lakeside, talking and laughing nonstop. Gloria also worked as a waitress at Chelsea Jo’s where she became a favorite to countless patrons.

A devoted daughter to both of her parents before they passed, Gloria loved walks on the beach, journaling, shopping, crafts, reading books and devotional prayers.  She shared her many interests with her children and her three grandchildren Owen, William and Isabella.  Their “Nana” showered them with gifts and love.

During the last few years, Gloria also grew to love her chickens. But more than anything, Gloria lived for her family and friends. She touched countless lives and will continue to do so as she watches over us.

Gloria is survived by her sister Donna, her daughters Jessica and Gail and her three grandchildren Owen (15), William (7) and Isabella (4).