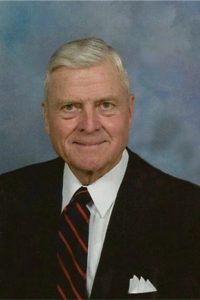 George Harvey Marshall passed peacefully away August 12, 2022 at The Village at Gordon House, Gordonsville, Virginia.  He was born November 24, 1923, in a log cabin in Louisa, Virginia to Albert Clyde and Sara Ellen Clevenger Marshall.  George was preceded in death by his wife of 46 years, Emily Elizabeth Terrell Southard Marshall (Libby), of Fredericks Hall, Virginia and by his five siblings: brothers Robert, Howard, Albert and Jim and sister Alice Marshall Buck.

George was a proud World War II veteran having served with the 633rd Anti-Aircraft Artillery Battalion, Headquarters Battery.  This battery was attached to the 80th Infantry Division of the US 3rd Army under General George Patton in the European Theater of Operations.  He was a member of St. James Episcopal Church where he and his wife had both served on vestry.  George was a co-owner of Louisa Feed Service, a Southern States Cooperative service agency, for over forty years.  He was a charter member of the Veterans of Foreign Wars Post 8947 of Mineral, Virginia and was a member and past-master of Day Lodge #58 AF&AM (Ancient Free and Accepted Masons) in Louisa.  He was also a member of the Louisa County Ruritan Club, having served as president as well as district secretary of the Rappahannock District clubs.  George and his brother Howard Marshall together owned several farms: George managed their farming operations raising free-range turkeys, beef cattle, and laying hens (and one rooster) in an automated egg gathering operation.  George had the first pontoon boat on Lake Anna ordered through Ed Whitlock’s Louisa Boat and Motor.  He loved to take folks out on the water and would pass out song sheets and sing while going up and down the lake.

George authored two books:  The Marshall Family in Louisa County, Virginia: The Early Years and The War Years 1943—1945.  From his first book: “Growing up on the farm was never a hardship.  We didn’t have everything that we sometimes desired, but we made to do with what we had and I have many fond memories.”

There will be visitation at St. James Episcopal Church, 102 Ellisville Dr., Louisa, Virginia on September 9 between 12:30 and 1:30 PM.  A Masonic service will begin at 2:00 PM followed by an Episcopalian Celebration of Life conducted by the Rev. Dr. Jennifer Lazzuri.  Interment with military honors will immediately follow the service at Hillcrest cemetery.  In lieu of flowers, please consider memorial donations to St. James Episcopal Church, P. O. Box 1216, Louisa, VA 23093 or to a favorite charity