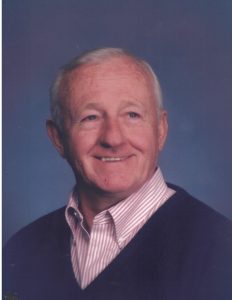 In loving memory of Frederick Karl Fischer who was laid to rest on October 20,2021, Fred went home to be with Jesus on October 12, 2021 and was greeted in Heaven by his late son Mark Lee Fischer. Fred was born in Akron, Ohio, in 1929, He grew up in Fall River, Ma., graduated from Case Institute of Technology. He then spent 20 years in the United States Air Force. Fred worked for Reynolds International for 33 years and retired in 1992. Fred was preceded in death by his late parents George W. Fischer and Alma Wood Fischer as well as his son Coach Mark Fischer of Louisa, VA Fred is survived by his wife of 58 years, Virginia Fischer, daughter Kate Bir and son-in-law ‘Tom’, Daughter-in-law Pam Fischer,4 grandchildren and 1 great grandchild.

In lieu of flowers the family has requested contributions be made in his name to the Mark L. Fischer scholarship fund. To: Louisa Education Foundation with “Fischer Fund” on the memo line. Mailed to LEF at PO Box 130, Mineral, VA,23117