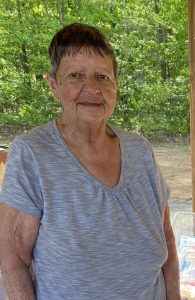 On January 22, 2023, Frances Davis Johnson passed away peacefully at her residence, she was 83 years old. Born May 2, 1940 in Louisa County, she was the daughter of Ocie Alberta Davis. It would be wrong to say that Frances lost her battle with her illness, because she never stopped fighting. When most people would have given up, she stayed strong. Just because she is no longer here, it doesn’t mean she lost her fight. Frances was the wife of Clarence Corroll Johnson, Sr. They were married February 12, 1957. She was the mother of five children. Patsy Johnson, Clarence Jr. (Patricia), Bruce (Crystal), Pamela Tignor and Mary Lewis (John). Eight grandchildren; Crystal Hill (Jimmy), BJ (Candace), Kelly Pugh, Amy Boswell, Michael Boswell, Tiffany Johnson and Megan Johnson (Jamie) and fourteen great grandchildren. Despite her large family, Frances always made time for everyone. She always provided love and support for them. While she remained active in her families lives, the loss of Clarence many years ago, took a toll. Frances was pre-deceased by her husband, Clarence Johnson, Sr., daughter Mary Lewis and granddaughter Amy Boswell. A celebration of life will be held Friday, January 27, 2023 at Woodward Funeral Home at 2pm with visitation from 1-2pm.