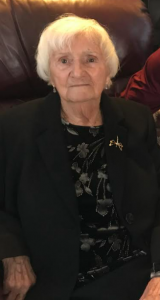 Mrs. Garren retired from American Filtrona of Richmond, VA and was a caregiver for several years.

A memorial service will be planned at a later date.