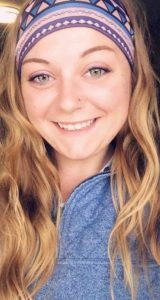 Courtney spent the early years of her childhood growing up in Holly Grove, VA.  Her family moved to Goochland just before she started kindergarten where Courtney attended Goochland County Public Schools.  She played basketball for the Goochland Middle School Lady Eagles and well as in high school for the Lady Bulldogs. Courtney graduated from Goochland High School in 2014 and briefly attended Piedmont Virginia Community College.  Courtney worked several different jobs in her life, from being a lifeguard at the local YMCA while in high school to being a licensed insurance agent at Elephant.  She was most recently employed at Dairy Queen in Mineral.  Courtney was gifted with her Grandma Kay’s creative talents and loved to draw, paint and create.

Courtney struggled with addiction and spent the last two years of her life battling the dual demons of drugs and their effects on her mental health.  Although drugs did not kill her, they certainly contributed to her death.  They weakened her spirit and dimmed her shining light.  She chose to release herself from all the chains that bound her here on Earth.  She was greatly loved and will be forever missed.

Due to the COVID-19 virus, funeral services for Courtney will be held at a later date.