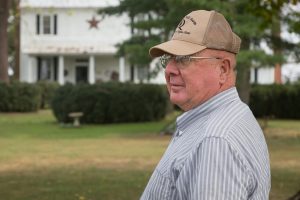 Charles Stapleton “Pete” Rosson of Trevilians went to be with his Lord Saturday November 6, 2021 at his family home, Quaker Hill, after a courageous battle with pancreatic cancer. The only son of Charlie Lee and Ruth Waddy Rosson was delivered by his namesake longtime Louisa physician, Dr. Stapleton Daniel at Quaker Hill on December 20, 1941.  A fourth generation farmer and longtime supporter of agriculture in Louisa County, he was a 1961 graduate of Louisa County High School and attended North Carolina State University before returning to manage the family farm.

A Graveside Service is planned on Sunday November 21 at 2:00pm at Hillcrest Cemetery in Louisa. In lieu of flowers the family has created a scholarship in Charles’s honor for a graduating senior at Louisa County High School that will be attending college to study agriculture. Please make checks to the Louisa Education Foundation PO Box 130 Mineral, VA 23117 and put Charles Rosson Agriculture Scholarship in the memo line.

He served on numerous agriculture boards including the Farm Service Agency as Board Chairman, The Orange Area Wool Pool, Central Virginia Feeder Calf Association, Louisa Farm Bureau and as a founding member of the Louisa County Agricultural Fair. He was also a lifetime member of the American Aberdeen Angus Association and maintained one of the top herds of registered Angus Cattle in the country twice having one of his herd bulls ranked among the top two Angus bulls in the world.  He received the highest honor of the Future Farmers of America, the American Farmer Degree. Charles was a founder of the Louisa County 4-H Livestock Club. Working with young people and promoting farming were two of his passions. He gave incredible and unwavering support to his sons Lee and Charles as they built Quaker Hill Farm into one of the prominent agriculture operations in the country.

He is survived by his wife of 53 years, Elizabeth Coleman Rosson and 5 sons Ronald Johnson(Dee) of Culpeper, Thomas Johnson of Louisa, Rodney Blake Johnson(Becky) of Salem, Charles A. Rosson(Sherry) of Louisa and Lee Rosson(Joy) of Louisa, four sisters Marian Payne of Louisa, Lillian Spicer(Lewis)of Abingdon, and Charlene Palmer(Robert) of Winchester.  In addition Charles had ten grandchildren that were including Coleman, Haley, Charlie, Elizabeth and Ellen Rosson, Amanda, Thomas,  Ben and Rachel Johnson and numerous nieces and nephews.