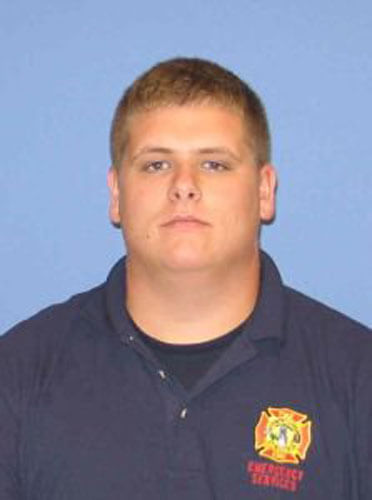 Charles Dwaine Wilson, 21, of Bumpass died suddenly Thursday, June 28, 2012 at the University of Virginia Medical Center in Charlottesville.Charlie was born in Louisa on December 31, 1990 a beloved son of Blair and Barbara Wilson of Mineral, who survive him.He is also survived by his sister, Katie Wilson of Henrico; his fiancée, Brittany Bateman of Bumpass; his grandparents, Hugh and Elleanor Wilson of Kilmarnock; and numerous aunts, uncles, cousins, friends and his fire and EMS family.He was preceded in death by his grandparents, French and Sylvia West.Charlie was a professional firefighter and EMT for Louisa County, beginning his firefighting career as a part-time firefighter/EMT in 2009 and was hired full-time in August 2010. He was stationed at the Louisa Fire Company. He graduated from Louisa County High School in 2009 and attended J. Sargeant Reynolds Community College. He was a member of the Mineral Volunteer Fire Department, Louisa Volunteer Rescue Squad, and Crozier Volunteer Fire Department. He was also a member of Mineral United Methodist Church where he served as an acolyte, member of the Pastor-Parish Relations Committee, and youth group. Charlie was a member of Louisa Boy Scout Troop 3, attaining the rank of Eagle Scout in 2008 and also served as assistant Scout Master for Mineral Boy Scout Troop 183. He was recognized by the Volunteers of Louisa as the Youth Volunteer of the Year in 2008 and received Above and Beyond recognition from the Louisa Ambulance Authority.The family will receive friends at the Mineral Baptist Church Family Life Center, 51 Louisa Avenue, Mineral, from 2 to 4 p.m. and 6 to 8 p.m. Sunday, July 1. Funeral services will be held on Monday, July 2 at 2 p.m. at Mineral Baptist Church Family Life Center with interment at Spring Grove Cemetery, Mineral.In lieu of flowers, the family requests donations be made to Mineral Volunteer Fire Department, P.O. Box 274, Mineral, VA 23117.