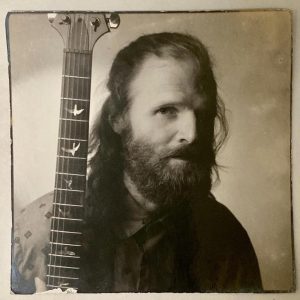 Master guitarist and skilled painter, Curt Heavey was the consummate artist with a personal style that transcended all categories. Curt was always exploring his artistic boundaries through his life-long career as a musician, teacher, and musical mentor. Curt was also a devoted and loving father to his daughter, Liliana Sappho Heavey.  Curt passed away at age 68 on December 7, 2021, after a brief illness.

Curt was born on October 8, 1953, in Houston, Texas, to the late John M. Heavey of Grasonville, MD and Katheryn Savage of Myrtle Beach, SC.  Although Curt and his three siblings moved many times during his early years, Curt found his life’s calling at age 12 when he pledged to be a guitarist. Even at a young age, Curt was determined to play his music and not play covers or be a session musician.  Curt spent ten years in Baltimore where he studied classical guitar at the Peabody Institute and painting and drawing at the Maryland Institute of Art. During his Baltimore days, Curt taught guitar for ten years at the legendary Guitar Shop in Washington DC. Included among his students were John Jennings, lead guitarist for Mary Chapin Carpenter, John Kerry, who was a Massachusetts Senator at that time, and Kelsey Begay, president of the Navajo Nation. Curt also performed as lead guitarist of Anne Watts and Boister, a well-known Baltimore area band. Curt collaborated with Boister as well composing scores for several Buster Keaton classic silent films.

After establishing his reputation as an accomplished classical and jazz guitarist in Baltimore and Washington, Curt moved to Easton, MD, where he married Gryphon Corpus. Together they raised their lovely daughter, Liliana Sappho Heavey.  Curt also transcribed dozens of piano compositions for solo guitar, including the works of Bartok, Bach, Satie, Brahms, and Prokofiev. He performed at hundreds of diverse venues along the East Coast, including the Kennedy Center, the Chilean Embassy, the Shakespeare Folger Library, the Walters Art Museum, and Center Stage.  Curt was a popular guitar teacher over the years whose students not only received expert musical instruction, but also got a healthy dose of his philosophy of life.

Curt lived his final six years at the Acorn Community Farm in Louisa County, Virginia where he happily worked as a seed germinator, regularly played guitar solo or with a group, and with Gryphon raised their daughter Sappho.