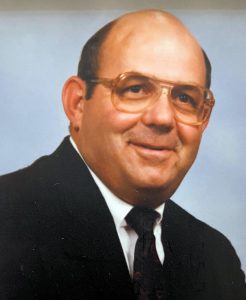 Dixon “Dickie” Parlier Ellis Sr., 75, of Louisa passed away peacefully at his home on Thursday, March 19, 2020, with his family by his side.

He was born in Louisa to the late Frederick Earl Ellis and Edith Elmyra Parlier Ellis. He was preceded in death by his brother, Frederick “Fred” Earl Ellis.

Dickie was married to Margaret “Peggy” Thompson Ellis on February 28, 1970. They were married for 50 years. Together they had two children, Jennifer Ellis Filer (Tom) and Dixon Parlier Ellis, Jr. (Jessica). He was affectionately known as Papaw to five grandchildren, Lauren and Lane Filer, Brenden, Owen and Sadie Ellis.

Dickie was proud to serve his country in the Army during the Vietnam War (1966-1967) and honorably discharged as a Bronze Star recipient. He was a successful second-generation owner of Louisa Auto Parts that was started by his father, Earl, in 1962. Dickie was also a long-standing member of Louisa Lions Club and Louisa United Methodist Church.

Dickie would like to thank the many doctors and nurses of Sentara Martha Jefferson who provided great care. He would especially like to thank his doctor and short-term friend, Dr. Alexander A. Schult, Pulmonologist.

A Celebration of Life will be held at a later date. In lieu of flowers, memorial contributions may be made in his name to Louisa United Methodist Church Building Fund, P. O.  Box 217, Louisa, VA  23093.

He was well loved by many and thought highly of his employees and customers, past and present, over the years.