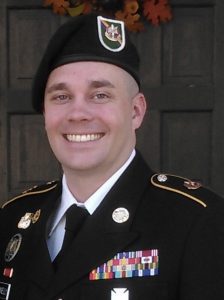 Wes was born on July 4, 1986 in Annapolis, Maryland. He grew up there, and then later in Centreville, Maryland.

Outside of serving his country in the military, he worked as a Financial Analyst for General Dynamics Information Technology. He earned a Bachelor of Science degree in Criminology from George Mason University (Fairfax, Virginia) in 2016. He also received an Associate of Arts degree in Business Administration, Management and Operations from Anne Arundel Community College (Annapolis, Maryland) in 2009. He was a 2004 graduate of Queen Anne’s County High School (Centreville, Maryland) where he excelled in Track & Field.

Wes enjoyed watching football, especially cheering for the Pittsburgh Steelers. He cherished time with family, having fun partaking in yard games, playing with the family dogs, Wes enjoyed traveling to Ireland and all things Irish. He genuinely enjoyed meeting people and extended a helping hand wherever he could. He shared his beautiful, broad smile with many.

Wes is survived by his wife, Lindsey (nee Mitchell), parents Stephen and Karen (nee Monkman) of Louisa, Virginia, and sister Caitlin Mock (Landon) of Washington, D.C. He is preceded in death by his grandparents, William and Marian Donnelly, and Wesley and Georgia Alleyne Monkman.

The family plans to hold a funeral Mass and burial service at a later date.