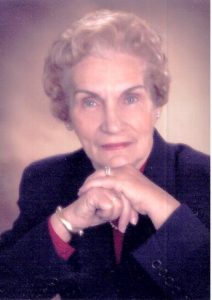 Mrs. Virginia Byrd Coleman Kostyal, 93, passed away Tuesday, October 22, 2019 in Riverside Regional Medical Center.  She was raised in Louisa County and Hinton, West Virginia and had been a resident of Newport News for nearly 70 years.  Virginia married Stuart J. Kostyal, Jr. on August 9, 1952.

She graduated from Marshall University (BS) and West Virginia University (MS).  She retired from Newport News Public Schools after serving for 38 years as a teacher, counselor, assistant principal, and guidance director. Mrs. Kostyal took great pride in her role as an educator and positively impacted thousands of students during her tenure as an educator.  She was an active member of Aldersgate United Methodist Church for many years, Delta Kappa Gamma – Honored for 50 years of service, Woman’s Club of Newport News, Virginia Peninsula Rose Society where many hours of labor and love were often rewarded with blue ribbons for her best in class roses,  Peninsula  Council of Garden Clubs, Peninsula Counselors Association,  Member of Newport News Retired Teachers Association, and the Women’s Club of Newport News  where she helped coordinate and implement their “Santa House” event which was enjoyed by those who were young and young at heart.  One of her proudest accomplishments was being chosen Counselor of The Year for The State of Virginia in 1987.

Mrs. Kostyal enjoyed attending performances at the Ferguson Center for the Arts as well as traveling.  She enjoyed her trips abroad but especially enjoyed her trips to the Outer Banks with her family and she cherished her holidays spent with family.

Preceded in death by her parents, Byrd and Helen Hiter Coleman; her beloved husband of 50 years, Stuart J. Kostyal, Jr.; her brother, Joseph A. Coleman; and her sister, Ann Goodwin.  She is survived by her sisters, Mary Page Coleman Taylor (W.C.) and Frances Coleman Vawter; her brothers, William R. Coleman (Peggy) and Carl E. Coleman (Jean); sisters-in-law, Carol Coleman and Marilyn Gibson; and a host of nieces, nephews, great-nieces and nephews, and great-great-nieces and nephews.

The family will receive friends Friday, October 25, 2019, 5:30 to 7:00 pm at Peninsula Funeral Home, Newport News, VA.  She will be taken to Woodward Funeral Home, in Louisa, VA for visitation at 1 p.m. Saturday, October 26 and service at 2 p.m. followed by burial at Hillcrest Cemetery Louisa, VA.

Memorial contributions may be made to the Woman’s Club of Newport News Scholarship Fund, P.O. Box 1986, Newport News, VA 23601 or a charity of your choice.