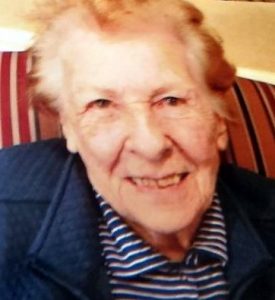 Betty was a beautiful lady and a wonderful wife and mom with many, many friends. She had been suffering from the ravages of Alzheimer’s disease for the last six years. Betty was born to Daisy and Earl Brown in Omaha, NE in 1923 and lived in Nebraska for 30 years. She married Richard C. Meck in 1942 shortly after Dick’s Guard unit was called for WW ll. Betty and Dick enjoyed 25 wonderful years together with their three sons. While Betty was always a devoted Cornhusker, the family moved to Connecticut in 1956 and called New England home for almost 60 years.

Unfortunately, her first husband suddenly passed away in 1967, but Betty found and eventually married a wonderful Irishman Bartholomew F. O’Neill. Bart and Betty called Cape Cod their home for 32 years and played golf almost every day before Bart’s passing in 2004. Betty continued to live alone on the Cape for 10 more years before needing “assisted living” and relocating to Virginia.

Betty is survived by her brother Earl Brown Jr of Winnsboro, TX and her three sons, Richard G. Meck (Sandy) of Lake Anna, VA, Bret Meck (Sandy) of Windham, ME, and Todd Meck (Susanne) of Darien, CT. She is also survived by 11 grandchildren and 18 great-grandchildren. Besides her parents and two husbands she was predeceased by her sister, Jeannette Waller.

Betty’s family wishes to thank caregivers at the Betty Queen Center and Amerisist Assisted Living of Louisa, VA, the Fox Trail Memory Care Unit of Orange, VA, the Culpeper Memorial Hospital of Culpeper, VA, and Hospice of the Piedmont of Charlottesville, VA.

Local arrangements have been handled by the Woodward Funeral Home of Louisa, VA with burial to follow in Cape Cod by the Doane Beal & Ames Funeral Home of South Dennis, MA.